Service Performance Monitoring (SPM) allows you to aggregate logs into services and operations. After a mapping process, users can easily view RED (Rate, Error, Duration) metrics and graphs for each service, and for each operation under that service. A standardized overview of your architecture is available on a single page.

The heart of SPM is a data model that aggregates logs into services and operations. The following terms are defined:

Raw data always consists of logged requests. User-defined mappings tell Scalyr which requests are associated with which service and operation. The mappings also tell Scalyr which fields to use when calculating error and duration. Requests are aggregated to calculate rate and provide operation-level and service-level performance data.

For example, nginx access logs contain URI paths for "/app/home" and "/app/photo". Nginx is mapped as the service, and each URI path is mapped as an operation. The number of requests for each operation is used to calculate rate data. The HTTP status field in the data is mapped appropriately to calculate errors. And the request_time field is mapped to calculate duration.

This process generates a number of fields with the prefix "sca:":

If you are importing trace data from OpenCensus or OpenTelemetry, three additional "sca:"-prefixed fields are generated:

A future version will aggregate logged requests (spans) further through parentSpanIDs and traceIDs to provide full tracing capability. Rather than instrumenting code for a tracing framework, users can simply add a few fields in their logs and obtain the same functionality.

At present, the number of operations which are automatically tracked and visible in the UI is limited to 20.

You can easily monitor the real-time performance of all your services and operations on a single page. Performance data is presented according to the RED method:

These three metrics provide a standardized overview of your architecture. Furthermore, they are useful for assessing customer satisfaction. 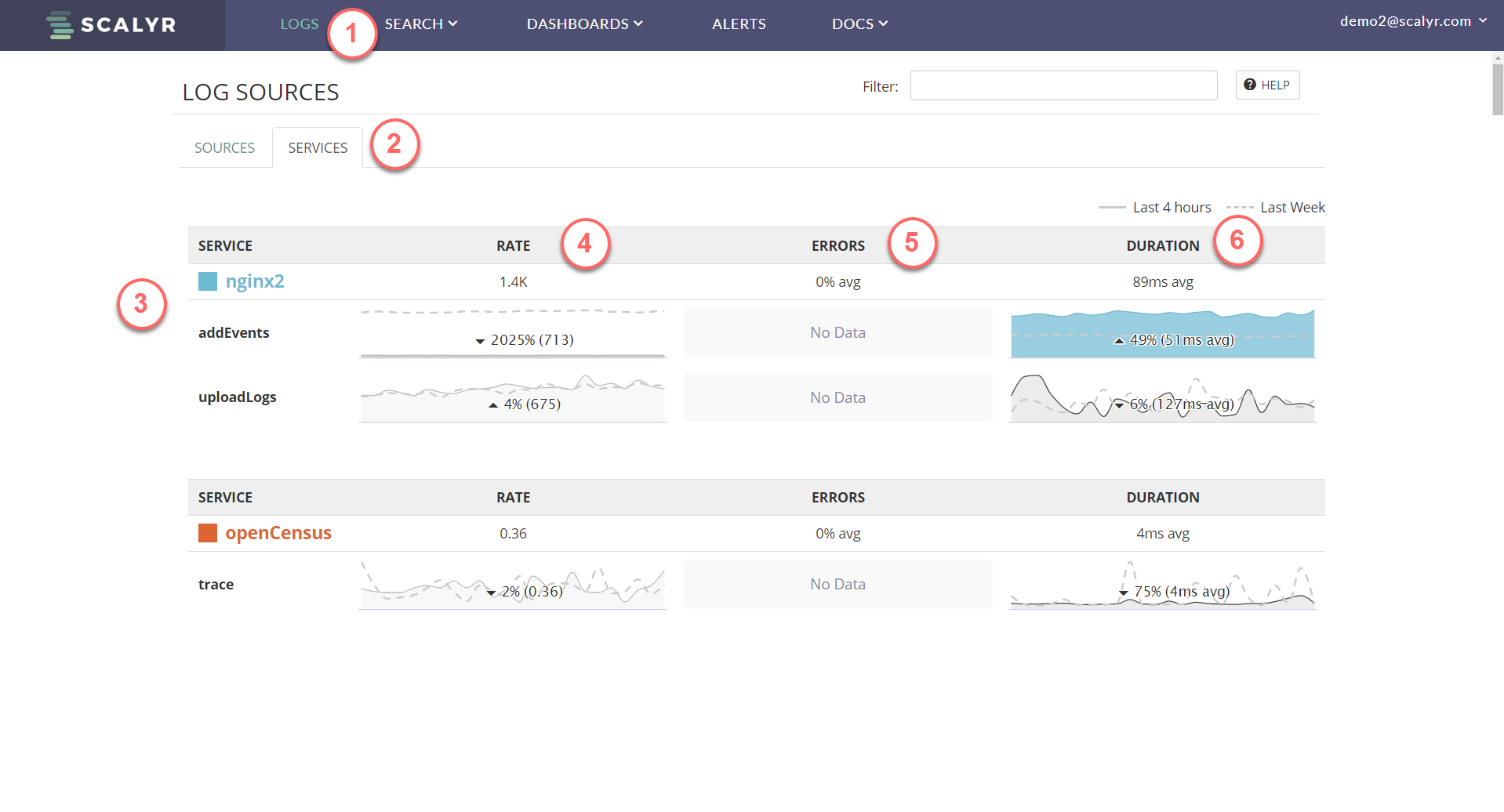 (1) To monitor the performance of your services, select Logs from the main menu.

(2) Then select the Services tab.

(3) Services and operations are listed hierarchically, with operations under their parent service. They are color-coded for readability.

In this example we have two services, nginx2 and openCensus. Nginx2 has two operations, "addEvents" and "uploadLogs", while openCensus has one, "trace".

Note that If you are importing trace data from OpenCensus or OpenTelemetry, the data is treated as a specific operation (sca:operation == "trace").

(5) For each service and operation rate data is displayed as the percent of requests for that service or operation that are errors, averaged over the past four hours.

The SPM configuration file is located at /scalyr/mapping. To create this file, click on your login at the top right of the page, select Config Files, and then select the Create New File button on the upper-right.

Here is an example of the configuration file syntax:

Note that each operation is a clause in the mappings field. In the example above we are defining three operations - "trace", "addEvents", and "uploadLogs". One of these ("trace") is for the "openCensus" service, while the other two are for the "nginx2" service.

At present, the number of operations which are automatically tracked and visible in the UI is limited to 20.

Each operation has the following subfields:

filter: Expressed in Scalyr Query Language, this filters for the log messages associated with an operation.

If you are using regex for mapping an operation, the matches from the regex should be a fixed number of operations. For example, if the data mapping rule for operation is { source: "url", match: ".*method=(.*)", replace: "$1"}", the user has to ensure the regex matches to a fixed number of method names. To prevent exploding of the regex matches we recommended you write a very tight filter when regex is used for operation mapping.

For example, the above file specifies three operationNames (type: "fixed" for all 3; source: "trace", "addEvents", and "uploadLogs"), and two serviceNames (type: "fixed" for both; source: "openCensus" and "nginx2"). The Services tab of the Logs page will show the "openCensus" service with the "trace" operation under it, and the "nginx2" service with the "addEvents" and "uploadLogs" operations under it.

latency: This specifies which numeric field or fields to use as a measure of duration (latency). latency is a clause with subfields. When a single field in the (filtered) data can specify duration, the clause will contain three subfields: - type: This will will have a value of "latencyfield" - source: This refers to a numeric field in your (filtered) data containing the measure of latency for the respective operation. - units: This defines the units of the metric you have specified in source. Values can be "seconds", "milliseconds" and "nanoseconds", or "s", "ms" and "ns".

For example, in the configuration file above, the "addEvents" and "uploadLogs" operations both have a request_time field in the (filtered) data which measures latency, in seconds. Thus type: "latencyfield", source: "request_time", and units: "seconds".

For example, in the configuration file above, the filtered data for the "trace" operation contains two fields - startTimeMs and endTimeMs - that can be used to calculate latency. Thus type: "rewritefield", action: "timeDelta", startTimeMs: "startTimeMs", and endTime: "endTimeMs".

isError: Expressed in Scalyr Query Language, isError defines "error" and "success" for each request associated with an operation. For user-facing operations this tends to be a mapping of the field in your (filtered) data which contains the HTTP status code. In the configuration file above, all three operations define isError: "status > 399".

For machine-facing operations, isError tends to refer to a field logging the outcome of a request. For example, isError: outcome == "failure".

Note that for each operation you are only defining Error and Duration from the RED (Rate, Error, Duration) trilogy. Scalyr calculates Rate from the number of requests per second associated with an operation.

Once mapped, it will take a few minutes for SPM graphs to load properly on the Services tab of the Logs page.